I went to watch ‘Wanted’ alone. No! That’s not IT… So I went to watch Wanted alone at Cineleisure. Yes, I went further than Sunway Pyramid this time. I wanted to watch it at the new Platinum Suites but missed the first show and didn’t have the patience to wait for the next one.

As I was preparing myself in my strategically positioned seat (back, middle…), the couple on who were seated on my right came in and took their seat. Hmmm… So I thought to myself, I hope they don’t start kissing or cuddling (because the girl was wearing the shortest shorts ever and it was cold in the cinema… Yes, I had bad thoughts/impression… Sorry!). To my relief, she took out her sweater and started munching on her popcorn… Pheww! So the movie started after 15minutes of showing some really , really good trailers (I can’t wait for Batman. Chris Bale looks hot and Heath Ledger might just gotten himself a nomination for the Oscars…).

Just as the movie was roling, a couple came in and took their seats on my left. The girl was wearing so much perfume, I almost choked! But whatever… I was there to watch Angeline Jolie kick some ass. I turned left to put my Twister bottle on the side of the seat when I was suddenly face to face with the girl next to me. She accidently ‘touched’ my hand and said ‘sorry’. She had the worst breath ever!!!! Either she didn’t brush her teeth or she really have problem with her breath, but it was so bad, that the girl on my right actually looked at her and started to cover the nose!

I braced myself for almost an hour before I feel the gagging reflex was creeping up. It was like seating next to Oscar the Grouch! I couldn’t take it anymore and the next thing I remember was puking my head off on my potato wedges! Luckily, I had a plastic bag with me. I apologized thouroughly to the girl on my right and she offered me minyak kapak and said, ‘I know… It smells really bad. I dunno how you managed to survive this long…’. I smiled and sat there quietly. Amazingly, the smelly girl didn’t flinched (or ignoring me) when I did the big ‘booboo’. And they were lucky I didn’t eat anything that morning. So it was mainly water (sorry for the details… I just feel like I have to explain myself so nobody thinks I’m gross…).

So that was it. I puked in the cinema on Saturday. That’s what I did… What? So what happened to the smelly girl? Why would you think that I’d say anything bad about her breath to her? Well… You lot kno me too well. I did have my say at the end. When I stood up to go out after the movie, she was still seating down and I couldn’t get through. So I told her to move because I was carrying my ‘booboo’. She looked horrified at the plastic bag and I told her, ‘Dik, lain kali jangan lupa berus gigi. Perfume tu tak boleh cover bau mulut…’. And the girl behind me laughed and told her bf, ‘you never smell meh? Very bad la! Kesian the kakak.’…. So my friends, I hope you had a better weekend than what I had to endure. And FYI, ‘Wanted’ is not so good. I should’ve watched ‘Made of honor’….

It’s been long since I update her progress. She’s walking properly now. And true enuff, thank God my house is small with no stairs at all! She loves playing outside and her favorite thing to play with is a broomstick. I think too much Harry Potter during my pregnancy… Heh… 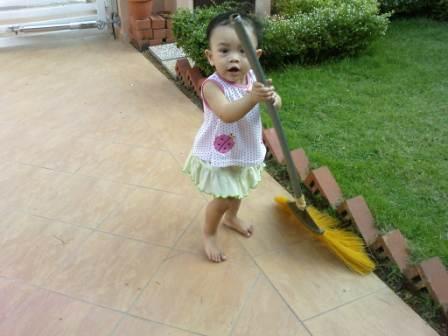 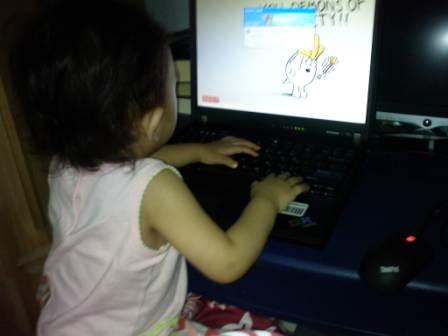 … with the laptop (did I mention she knos how to turn on the PC?)… 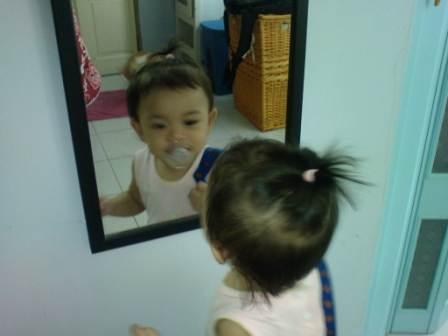 … a little bit vain. She kisses her own self in the mirror… 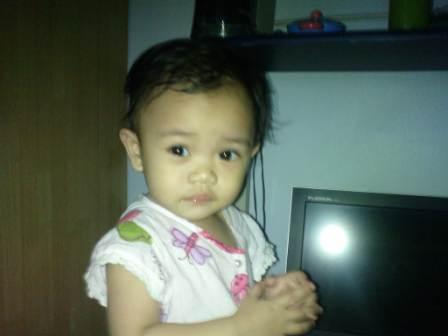 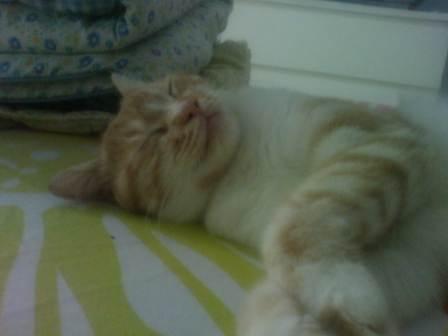 This is for Mrs C… My gedebam cat, Puffy…

I have a few thousand things to do but I’ve decided to be in denial today.

Let’s chat for a while…

How’s everyone doing? Thanks a lot for all the wishes. I’m dealing with my guilt and emotions pretty well now. I guess it’s good for us to have a second protege since I’m still in the ‘zone’ (not having a lot of sleep… etc… etc…). And I guess Baby K will be happy to have someone to play with. Also I’ve made a deal with her that she will always be referred as ‘BABY K’… 🙂

So… yesterday I took a half day off and went to shop. It’s been ages since I went out to buy something for myself. And after yesterday, I can safely say, there’s NOTHING interesting at all for me in either Mid Valley or The Gardens. I’m not going to elaborate more on that. Just know if you want to ask me out for outing, make sure it’s somewhere else.

It seems that nowadays, since the gagging festival started, I actually am gaining weight instead of losing weight. This might be due to the extra food I’m forcing down my throat to avoid chronic gastric again. Sigh… Watever! I need to stop whining and start embracing the whole experience… WATEVER!

Since it’s taking more than an hour for me to finish up this post, I’ll end it here for now. If I continue, I might damage my brain capacity… Can’t think of anything good tow rite. If you have any question for me, I’ll be more than happy to answer you…

We didn’t expect this to happen (again) this quickly. Nonetheless, we are very thrilled to annouce the news. So, yeay us!!!!

Progress: I am having the motherlode of headache and nausea. I didn’t have ‘this’ sickness when I had Baby K. I only had chronic gastric, which, was actually not so bad (although I complain a lot). At least I don’t have this urge to rip my head off and re-enact the Exorcist scene at every single movement. Terrible what this morning (they lied! It last a whole day and only stops when I sleep!) sickness does to you.

My feelings: I am actually having some kind of a panic attack. I’m happy but feel guilty at the same time. Baby K’s just big enuff to walk on her own and now mommy’s got a new bun in the oven. I guess it’s normal for parents to feel guilty about this. I dunno… I’m just feeling all sorts of emotions right now….

Po, is sooooo Jack Black. But my favourite character would have to be Po’s crazy father. Haahahahahahahhahahahahahahahahah!!!!!! He’s so funny! So obsessed with noodles!

I’ve read a few comments on the movie and most people said they would like to see more of the other characters talking. I disagree… The cast for the movie are all very high A-list. And I thought it was a good thing for them not to have too many lines as this will take out the focus away from Po. The graphic is super excellent. All the slow-mo kung fu move. So the very high class!

And who doesn’t like Po? How can you not love Po? He’s so round and funny. The whole cinema actually gave him an almost standing ovation when he managed to kick Master Shifu’s butt on top of the mountain when they were fighting for the dumpling. The cutest character (other than Po) would be baby Tai Lung. So adorable!!!!

For those who haven’t seen it, you must go… because ‘there’s no price for awesomeness…’…. Hahaahahahahahahahaha!!!!

This morning, Abu’s niece passed away due to acute renal failure and infection. She just celebrated her 3rd birthday 2 weeks ago…

I don’t even kno where to begin but it was a scene, that I hope none of us would have to go through.

We received the news of her passing at around 4am this morning. She was admitted in the Sungai Buloh Hospital ICU yesterday after none stop muntah2 and cirit-birit. They just came back from umrah last weekend…

All the way from Subang to Rawang, I thought to myself, ‘let’s not cry…’. But as soon as I saw her small body lying on the mattress, I broke down to pieces. I braved myself throughout the whole thing… From mandi jenazah, to kapan, to kebumi… I couldn’t help but imagine all the ‘what ifs’… What if it was me? Would I be as tough as her mother? How do we continue our lives without her? After everything was done, we went back to their place and I can’t help but stare intensely at the grieving mother. She was crying as people approach her to convey their condolences. She kept telling stories about her little girl that just went. As people started to subside, at one point, she just stared blankly at the walls and there was complete silence in her head. No sound of her daughter’s laughter, no sound of her crying… She was empty… And it was a painful sight to see… 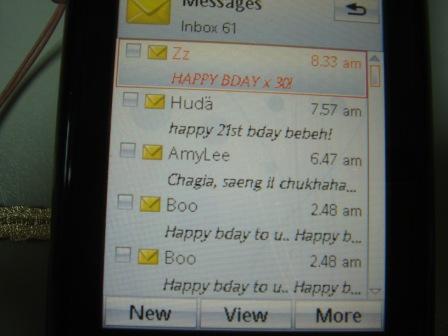 I can’t think of anything else… Whatever it is, here are some shoutouts on my birthday:

Mom: Thanks for giving birth to me 30 years ago…

Ajan: I’m still waiting for my birthday gift… An iPhone should be okay…

Abu: For my bday gift, I’d like to have 8 hours of uninterrupted sleep…

Baby K: The best birthday gift ever is your additional sets of gigi yang baru tumbuh!!!! Now you have 6 batang… Mommy loves you!!!!

My Tropicana posse: Thank you so much for the lovely watch! Thanks to Lisa for choosing the brightest color ever!!!

My friends: Thanks for the wishes… Especially to Huda… 🙂 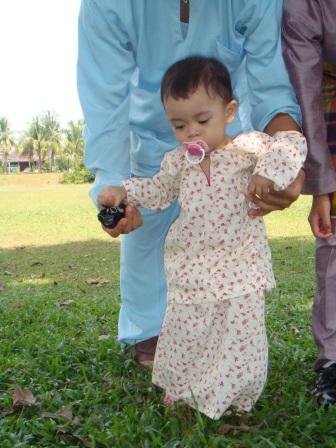 I’m down with a nasty flu. Very much groggy from all those ubat and I couldn’t remember how I managed to drive from Subang to KL this morning. Very the dangerous!!!!! If you see my car, stay far, far away…

Anyway, I was super busy last week. This week’s much better. And this weekend, we are flying back to KK for my uncle’s reception. I think the flu is the result of insufficent sleep + tiredness. Watever… I’m gonna be zen about it.

So… I was a little bit worried about Baby K still not walking at 13 months. She took a few steps but the problem with her is she walks like a ballerina (on her toes… all the time!). She can stand up perfectly well. I think she’s just terlampau manja. She wants to walk but prefer someone to hold her hands while she tip-toed like a dancing queen! Sigh… I did a quick research last nite and found that a kid could start walking as early as 8 months and as late as 18 months. Thank God!!!!!

I have a lot of stuff to share but I’m not in the mood for the time being. A little shoutout before I end the post:

Cat: Wah! Healthy aaaa you? But I guess you need all those exercise before you hike up Kinabalu.

Marina: Where are you?

Shanky: I shall entertain thee, while thou doeth the nite shift. Hehehehe…

Boo: Thou shall entertain Shanky, while she doeth her nite shift.

Mrs. C aka Da Great Luchador: I stole your signature idea… I love you because you are crayseee… 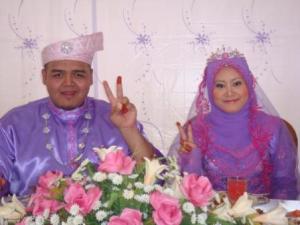 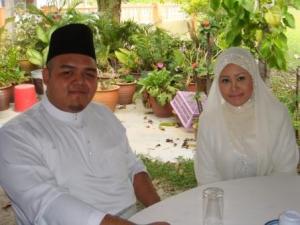